This corner of Tula Region is famous not only in Russia but far abroad. If you will ask a question about Leo Tolstoy or his famous novel “War and Peace”, you will definitely remember the place where the genius of Russian literature was born. In Yasnaya Polyana he spent most days of his life and created most of his masterpieces.
We offer you to visit places connected to Tolstoy and his family and to get detailed idea of his way of life, relationships inside the family, children, and descendants. We can guaranty you a visit of the estate with the house, if you will make an order before 31 days until the date of excursion. Together we can plan individual tour over memorial places which glorified Leo Tolstoy. 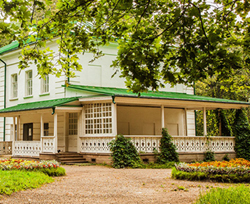 Yasnaya Polyana is probably one of the most beautiful estates in Russia. Walking over this wonderful place, visiting the house where a famous writer lived, you will get new impressions and know more about this unique site which Leo Tolstoy couldn’t live without. Here, it is easy to get into the literature captivity of his images - the iconic Tolstoy places meet visitors every day and take them to past epochs, to the pages of his works. And probably you will find yourself walking with old Prince Bolkonsky from "War and Peace» somewhere in Klin...
Traditionally, the tour starts at the White-Stone Towers – the symbols of Yasnaya Polyana. As well as all monumental constructions in the estate, they were built by the writer's grandfather Prince Volkonsky. The alley Preshpect leads all guests to the house. Before entering this light-filled birch corridor, we will discover a little mysterious half-overgrown Lower pond with fabulous bridges, and a huge mirror of a Large pond which is the oldest one in Yasnaya Polyana.
The Lower pond used to be a part of the triple cascade, on the Middle pond the bath was reconstructed in memory of the former, and the Upper is almost dried out. But this part of Yasnaya Polyana’s Park still keeps traces of the regular garden that was very popular in the 18th century.
To the left from the Preshpect there is a path which leads us to a restored greenhouse. Here, as well as in Tolstoy times, experiments on cultivation of plants, exotic for our climate, proceed. And turning right to the stables and Volkonsky's House, you will find yourself surrounded by Apple orchards. Those orchards and forest landings immortalized memory of Leo Tolstoy in housekeeping and now attract crowds of tourists with the snow - white dress in spring.
The way will lead you to a place where Leo Tolstoy lived and worked for more than fifty years. Only the stone foundation remains of the house where the writer was born. Today, with the help of multimedia, you can see in what atmosphere the writer grew up. How he created his works, how his views changed, how his family grew - the history of  long and full of events  life of Leo Tolstoy awaits visitors in a former wing, a two-story house with a frozen interior, as if Leo Tolstoy has just left it.
A living room, where the portraits of a famous family are looking at us, a study with a legendary black leather sofa and a work desk,  a Spartan bedroom, a room under the arches, which leads to privacy and concentration, a library with thousands of volumes which remained his notes... Each room and each object remembers Tolstoy and tells visitors his story about the life of a genius. And  in the last room this story breaks. From here Tolstoy would leave Yasnaya Polyana forever.
In his native forest of Yasnaya Polyana on the very edge of the cliff, Leo Tolstoy  found  his last peace. Back in 1908, he bequeathed: "No rites should be performed while burying my body in the ground. A wooden coffin and who wants to carry or to bring the body  in the Old forest in front of a cliff on the place of a green wand".

The Tolstoys family cemetery in Kochaki

Both the family of the writer and peasants  were  parishioners  of Church of St. Nicholas in Kochaki. Infant Leo wast baptized  in this chirch on August 29, 1828, the day after birth. The Church is often mentioned in the diaries of Tolstoy and his masterpieces.
At the altar of the temple there is a family crypt of the Tolstoys, where the mother and father of the writer, his brothers, a wife, children, and grandchildren were buried. On this cemetery you can also see a tomb of  Pirogova  who became a prototype for Anna Karenina.

"Tula province, Tula district, the station of Kozlova Zaseka" - nearest to the estate Yasnaya Polyana railway station Leo Tolstoy pointed out as his address . Here he and his relatives came to pick up mail, met numerous guests and accompanied them to the estate. In 1910 on "Kozlova Zaseka" arrived funeral train with the body of Tolstoy from the station Astapovo.
Today the station "Kozlova Zaseka" turned into a Museum and station complex. On the territory there are guided tours, the exhibition "Railway of Leo Tolstoy" which tells the story of the railways and acquaints with the manners of the travelers of the past.

Railway station "Yasenki" appeared with the opening of traffic on the site of Tula-Orel. Leo Tolstoy was there many times and even organized a school for peasant children. From here in 1910 he left for the last time. Nowadays, there is a historical and cultural complex dedicated to Leo Tolstoy and heroes of the Patriotic war of 1812. The Carriage-Museum presents a chronicle of the writer's visist to the station.

You can book an English tour to the estate of Leo Tolstoy and other places of interest by  phone +007-906-532-46-99 or by filling in a special form on this site: http://www.gid71.ru/contacts/
Pictures for this article were taken from open sources of Internet.